After leaning about Aleatory, procedural and instructional art in class I spent some time looking into these strategies and discovered Georges Perec. Georges Perec was primarily a french writer who employed a number of constrained writing techniques while producing his novels in the 1960’s and 70’s. For example, he wrote a detective novel called A Void about “the disappearance of the letter E from the alphabet”, without using the letter “e”. Multiple sources have suggested that his writing is often autobiographical and the decision to remove the letter, while kind of comical given the plot of the book, may also refer to the loss of life during the holocaust and his parents related deaths. Perec stated that his writing concerned “a passion for the apparently trivial details of everyday life, an impulse toward confession and autobiography, a will toward formal innovation, and a desire to tell engaging, absorbing stories”, which suggests that he viewed these potentially gimmick-y/arbitrary writing constraints as a source of creativity, narrative attention and expression in itself. He may be best know for his collection of “novels”, Life a User’s Manual  which uses a series of complex constraints to tell the story of an entire apartment building at a single moment in time.

Life a User’s Manual has 99 short chapters, each of which centers on a specific room within a Paris apartment building. One of the primary constraints Perec uses concerns the progression of rooms and chapters in the book which is based on a graphic representation of the building (itself an object in the book). Perec sketched out the fictional building and imagined that the 100 rooms of the building represented a grid, he then traversed this grid following the path of a knight on a chess board. In addition, he developed complex rules regarding specific objects, ideas, characters, references and even falsehoods that would need to appear in each room/chapter. The central plot of the book revolves around a character named Bartlebooth who constructs an intricate life plan to avoid boredom, only to fail due to the complexity of his own design. This character’s death comes at the end of the book which both prevents him from completing his life’s goal and allows Perec to avoid the 100th room/chapter which would have represented his own completion of the book’s form and constraint. 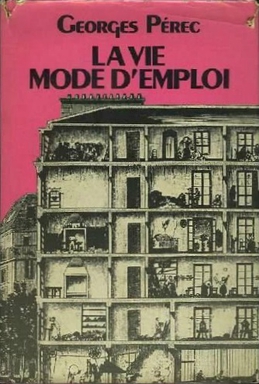 A New York Times review of the english translation of Life a User’s Manual (debuted a few years after Perec’s death) described his writing: “To read Georges Perec one must be ready to abandon oneself to a spirit of play. His books are studded with intellectual traps, allusions and secret systems, and if they are not necessarily profound (in the sense that Tolstoy and Mann are profound), they are prodigiously entertaining (in the sense that Lewis Carroll and Laurence Sterne are entertaining)”. While I haven’t read Perec’s work it certainly does seem profound to end such a formalistically complex book with a sort of double statement on the failure of complex human systems.